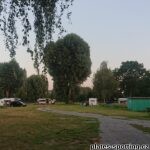 2x D, 2x NL. Most citizens respect the recommendations of their governments. Thus, B (warning to the PRG) disappeared and N completely disappeared. This not only prevented most states from entering, but also called on their citizens to return home.
And we will only know from the so-called Schengen: “Caught together, hung together.”

When the heat is over, I’ll head to P10 again. Only there is something to see. On Friday, I drove through the center in the dark and became depressed in disgust. I have never seen anything more disgusting than Wenceslas Square and its audience.

So that’s the metropolis. And in the countryside, where there are very nice, well-maintained cities, they suffer under the onslaught of Praguers. And he’s angry. In the PRG, hotel prices fell by 50% (ie those that did not remain closed) and in the countryside they all rose by 50%. And the tangle to that.