No one was left at the embassy in Moscow. We foolishly demanded parity. RUS then announced that local citizens working for the foreign embassy were included. So our large complexes in Moscow will now just fall into disrepair.
Clearly the best and cheapest offer for the construction of a nuclear power plant we forgot. H and FIN must tap their foreheads.
Maria Zakharova, a spokeswoman for the Ministry of Foreign Affairs of the Russian Federation, which is conversing with us, has announced that a list of the Axes of Evil will soon be compiled. So we get to the list with USA, EST, LV, LT, PL, UA and GE. Yes, but of all the Russians, they really only liked us. Then only Poles love us. Otherwise, we are stolen from everyone in the world. I would be proud to be on the list with A, CH, MC …
Karlovy Vary, our famous spa, has been popular with Russians since time immemorial. Their tsars had already come here. Now empty. There are hundreds of hotels, apartments and more. And thousands of UA workers out of work. Karlovy Vary is a disaster.
And this is how it could be continued. Economic sanctions have yet to be announced.
This is the balance of bigotry and hatred. 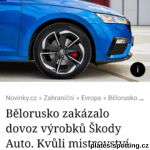 After all, we got something! An IND student in the Czech Republic jumped home for the mass holidays by the river Ganges. And she returned to CZ with the IND covid mutation. So people can’t even go shopping to D here, but they can fly to IND (currently the craziest country). Yes, the EU has banned flights to the IND. This is a big problem to come to the EU from London, for example, isn’t it?
Look what the Myanmar are in Prague! But no car.
I laughed at least once this turbulent week. BY Patriarch Lukashenko issued a ban on the import of Skoda cars. Also products Beirsdorf (Nivea etc.) and Liqui Molly. They certainly did not invent it in Škoda Mladá Boleslav, but on the uppermost floors of the concern in Wolfsburg. We will not be sponsors at the BY World Hockey Championships. We will punish them for the owner and we will be indebted to the progress and to Mr. Biden etc.
Do you know the proverb? He who sucks the wind reaps the storms.