As the Czech Republic capital launches a crackdown, the Observer joins one of the organised pub crawls that are blighting residents’ lives

ps://www.theguardian.com/world/2019/aug/25/prague-drunk-tourists-conquer-our-cityEugen Kukla could not have made his feelings clearer as 120 drunken tourists thronged noisily past his home around midnight, rudely breaking the silence of a normally sedate city-centre residential street.

“Fuck pub crawls, fuck pub crawls,” he repeated over and over again, while filming the scene on his smart phone. Some of the crowd reacted in amusement, smiling and waving into the camera.

But Kukla, 55, a photojournalist, did not see the joke. “It’s an expression of my personal feelings, a buildup of frustration over a long period of time, years and years and years,” he said. Kukla says his and his family’s lives have been disrupted by the snowballing trade in pub crawls through the centre of Prague and past their fourth-storey flat. “It’s been going on for 10 or 15 years – but it’s got worse.”ps://www.theguardian.com/world/2019/aug/25/prague-drunk-tourists-conquer-our-city

Kukla’s act of resistance was witnessed by the Observer, which joined one of the organised crawls along with a senior councillor from Prague 1 municipality, the local authority responsible for the Czech capital’s historic tourist district – now under strain as never before from a burgeonps://www.theguardian.com/world/2019/aug/25/prague-drunk-tourists-conquer-our-citying influx of foreign visitors.

ps://www.theguardian.com/world/2019/aug/25/prague-drunk-tourists-conquer-our-cityOn a night when thousands of Czechs marched through the city marking the anniversary of the Soviet-led invasion on 21 August 1968 that crushed the liberal Prague Spring in communist Czechoslovakia, tourists from locations as varied as Australia, New Zealand, Germany, France, Brazil, Belgium and Armenia roamed the streets on a different mission – to have fun and get drunk.

The spectacle was graphic evidence that “over-tourism”, a phenomenon more commonly associated with destinations such as Barcelona, Amsterdam, Venice and Edinburgh, has arrived in Prague – a city that was all but sealed off to western visitors until 1989 when the velvet revolution swept the former communist regime from power.

In the years since, a rising tide of visitors has flooded in, up from 2.62 million in the year 2000, to just under 8 million last year, drawn by Prague’s reputation as home to stunning baroque and gothic architectural gems – and cheap beer. Numbers this year are forecast to reach just under 9 million.

The trend is transforming Prague and risks pushing out long-term inhabitants of the city centre – historically considered a residential district – and turning it into a tourist-only zone. That prospect was called “humiliating” by Jan Štern, who took office this year as the city’s first “nightlife mayor” and has negotiated with bar owners trying to persuade them not to cooperate with pub crawls and to enforce policies prohibiting outdoor noise that would make conditions more tolerable for neighbouring residents

“It’s important that we don’t give up the historic city centre, which is our most valuable legacy, and not let it become a dead zone that’s just a background for nightlife and a cheap type of tourism,” said Štern.

Now the authorities – alarmed at that possibility and the city’s growing reputation as a location of cheap booze and easy fun – are pledging a harder line with miscreant visitors, some of whom stand accused of disrespecting Prague and its inhabitants.

“There could in the future be more action taken by the police. We want to get that message out,” said one municipal official. “There will be harder treatment against tourists and more harsh action when they are making noise. There are even voices calling to use riot squads. When there are 150 people on a pub crawl there needs to be a lot of policemen asking for documents. If anyone is drunk they’ll be taken to alcohol stations and things could be really hard for them.” 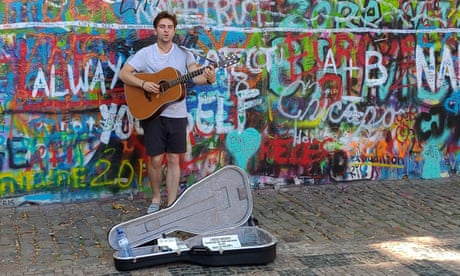 Over-tourism, as defined by three academics last year, is “the excessive growth of visitors leading to overcrowding in areas where residents suffer the consequences, which have enforced permanent changes to their lifestyles, access to amenities and general wellbeing”. That definition by Joseph Cheer, Claudio Milano and Marina Novelli, writing on the Conversation website, aptly sums up the reality of many European cities that have reaped the rewards – but also borne the brunt – of the explosion in cheap flights and Airbnb-style ps://www.theguardian.com/world/2019/aug/25/prague-drunk-tourists-conquer-our-cityaccommodation that recent years have brought.

But it is particularly pertinent to Prague, according to Pavel Čižinský, mayor of Prague 1, who has vowed to transform the city’s approach by cracking down on pub crawls and limiting alcohol serving times. He is also promoting information drives to encourage tourists to visit more peripheral areas instead of over-visited attractions such as Charles Bridge and the historic ninth-ceps://www.theguardian.com/world/2019/aug/25/prague-drunk-tourists-conquer-our-cityntury castle.

The centre of Prague “is losing the quality of normal life,” said Čižinský, a lifelong city resident who grew up near the Jewish quarter. “The centre is becoming a goldmine where you earn a lot of money, but it is not a place for living. It is a significant and crucial problem.

“Too many people are coming just for a very small number of purposes, and buildings, and those who want to make profits from the presence of the tourists worsen the situation.”

The signs of such tourist-driven commercialisation are everywhere, seen in the spread of cheap souvenir shops, massage parlours painted in out-of-place garish colours – an example of what officials denounce as “visual smog” – and the dancers in giant panda suits that proliferate in Old Town Square, exploiting local busking laws. That practice will be illegal from next month.

But it is the commercial pub crawls and other alcohol-related “tours” that are altering the city’s previously tranquil character most dramatically and driving an increasing number of long-term residents out, leaving vacant properties to be rented out.

Beer bikes, offering tours to up to a dozen people at a time while they drink unlimited quantities of famous ps://www.theguardian.com/world/2019/aug/25/prague-drunk-tourists-conquer-our-cityCzech brews to a soundtrack of loud music, have gained notoriety as noisy nuisances, blocking traffic and disturbing passersby. A council attempt to outlaw them is currently being cps://www.theguardian.com/world/2019/aug/25/prague-drunk-tourists-conquer-our-cityontested by a local microbrewery on the grounds that it is “discriminatory”.

‘I’ve remonstrated with tourists and some have been apologetic, but the guides have been aggressive and confrontational’

Also notorious are walking tours in Malá Strana, near Prague castle, which often culminate in visits to the Lennon Wall, a famous protest site during communist times that has since become a place of free expression for would-be graffiti artists, but is now being defaced with mindless spraying done at the urging of guides.ps://www.theguardian.com/world/2019/aug/25/prague-drunk-tourists-conquer-our-city

After offering unlimited beer, guides have been known to push clients into posing for outrageous pictures at city landmarks, according to Prague 1 municipality, which joined one such tour. Tourists were pictured clambering on to outsize statues of babies designed by the Czech artist David Černý in Kampa Park and pouring beer into the mouths of two male figurines in the courtyard of the Franz Kafka museum.

The authority scrutinised the tour after complaints that people had urinated on a statue unveiled in 2014 by Sir Nicholas Soames, Winston Churchill’s grandson, to honour Czechoslovakian pilots who fought with the RAF in the Battle of Britain.

Sign up for the Cityscape: the best of Guardian Cities every week

During the tour, some participants were observed writing obscene slogans on the Lennon Wall, owned by the Sovereign Order of Malta, which afterwards filed a criminal complaint.

Residents say such activity has made living conditions intolerable. “I remember this square being a quiet area where you would rarely meet anyone, let alone a tourist,” said Karolina Peake, 43, a lawyer who has lived her entire life in a house near the wall.

“Ever since the wall became part of the tourist and Baedeker circuit, it has become a bit of a nightmare, and in the last five years it has become unbearable. A lot of drunk tourists are coming and acting like they have conquered the place rather than just visiting. They have no respect for the fact thps://www.theguardian.com/world/2019/aug/25/prague-drunk-tourists-conquer-our-cityat there are people living here – and it’s making people reconsider whether they want to continue living in a place where their families have been for generations.”

Back on the tour that the Observer and the local councillor joined, people on the Prague Pub Crawl were led down ps://www.theguardian.com/world/2019/aug/25/prague-drunk-tourists-conquer-our-cityCeletná Street, once the route of ancient Bohemian kings, to a nearby establishment that offered an open bar for two hours before the tour was taken to a series of other pubs on a crawl that lasted into the small hours.

As the group wound from bar to bar, being greeted at each venue with a free “welcome drink” of cheap vodka, residents could be seen closing their windows – despite warm summer temperatures – against the rising din. The commotion grew louder as the night wore on. At no point did a tour guide ask the group to keep the noise down, despite local laws demanding quiet in residential areas after 10pm.

Indeed, there appeared to be little fear of the law. At the corner of Rybná and Benediktská Streets – near the heart of Prague’s infamous “party district” – a woman vomited copiously, oblivious to a police station just yards away. She eventually required first aid, administered by the councillor. Outsps://www.theguardian.com/world/2019/aug/25/prague-drunk-tourists-conquer-our-cityide a bar on 28 October Street, near Wenceslas Square, a couple lay smoking flat on their backs, while others on the pub crawl milled raucously around them.

Only after the councillor – who requested anonymity – called the police did officers arrive to tell the pub crawlers to quieten down. But they left without imposing fines or making arrests.

Such scenes are familiar to Peake. “I’ve remonstrated with tourists and some have been apologetic, but the guides have been aggressive and confrontational,” she said. “They see the residents as a threat to ps://www.theguardian.com/world/2019/aug/25/prague-drunk-tourists-conquer-our-citytheir business. Unfortunately Prague has become a bit of an Eldorado for these type of tour groups.”

The sometimes-obscene graffiti defacing the Lennon Wall has spread to neighbouring properties and sometimes even cars. “It’s pure vandalism,” she added.ps://www.theguardian.com/world/2019/aug/25/prague-drunk-tourists-conquer-our-city

One particularly ugly piece of vandalism last month prompted city authorities to up the ante, when graffiti was sprayed on the 600-year-old Charles Bridge. Two German tourists were fined and ordered to pay restoration costs. The graffiti was later removed by a Czech man acting alone and without authorisation.

One result will be an information campaign of dos and don’ts on Instagram, which could include pictures of some of the most notorious acts of misbehaviour being used in pixelated form to advise visitors of what to avoid. Posters have already been placed on the Prague metro warning visitors about the need to keep quiet in the streets after 10pm and that failure to comply could result in a €400 fine.

City-centre residents are being officially “encouraged” by Prague 1 municipality to report disturbances from Airbnb properties and other short-term rentals to the police, enabling the authority to fine the owners.

Meanwhile, pub-crawl and alcohol-based walking-tour companies will come under greater scrutiny for infractions, such as failing to offer customers receipts – as required by Czech law – or to check if they are over 18.

Bars cooperating with pub crawls will face increased inspection on health and safety matters, like whether they are exceeding capacity, said Čižinský, who added: “We will have to be tougher … I do not consider the negotiations very successful.”